In the past, doctors have tried many different therapies. Children were given growth hormones, in some the coronary blood flow was surgically improved by opening up the coronary arteries. Some of these therapies were effective for a period of time, others had many side-effects; none worked well and were effective over a long time.

The first remarkable treatment was concerned with the functioning of a cell extract with a so-called growth-factor, FGF2. Five Progeria patients were treated with FGF2 during several years by the Mexican Doctor José María Cantú Garza. Although they were not cured, these children did live significantly longer. They all grew to be older than 21 years, pigmentation of so called ‘aging-spots’ disappeared, and these children regained a lot of energy. 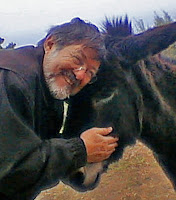 FGF2 stimulates angiogenesis, the formation of new blood vessels. FGFs are heparin-binding proteins and interactions with cell-surface associated heparan sulfate proteoglycans have been shown to be essential for FGF signal transduction. FGFs play an important role in processes of proliferation and differentiation of wide variety of cells and tissues. In humans, FGF2 has been identified as a signaling molecule, it binds fibroblast growth factor receptors (FGFRs) and is also known as basic fibroblast growth factor.

One important function of FGF2 is the promotion of endothelial cell proliferation (the thin layer of cells that lines the interior surface of blood vessels) and the physical organization of endothelial cells into tube-like structures. It thus promotes angiogenesis, the growth of new blood vessels from the pre-existing vasculature. This could explain the remarkable life prolonging effect of FGF2 in children with progeria.

There are more ways how FGF2 might be beneficial to patients with progeria. The major route would be upregulation of adiponectin. Adiponectin is known to be low in patients with progeria, and adiponectin is known to stimulate the formation of small blood vessels and overcoming stenoses in small vessels by inhibiting inflammation reactions. The reaction of adults with coronary problems in adiponectin suppletion has been shown to be limited, but the experience of Dr. José Cantú is that it did decrease angina complaints in the progeria children and increased their life span.
A second way how FGF2 can work is by decreasing apoptosis (a process in which cells play an active role in their own death).

Over the past few years many ideas about possible therapies for Progeria have been researched. One of them focused on the process of farnesylation (see: cause).

With medication it seemed possible to prevent that the deviant lamin A attaches to the wall of the cell nucleus.
By using Lonafarnib, a farnesylation inhibitor supplied by Shering-Plough, the structure of the normal lamin A is also influenced, but to a much smaller extent, and this seemed to render this an effective therapy.
The slowing down of farnesylation has been tested in mice with Progeria, and seemed to work well during some time. It is not yet known what is does in the long run, nor is it known if truly all symptoms are altered because of it. Inhibiting the process of farnesylation has, since a short while, also been used for several other diseases. It is not yet known whether side-effects may arise after several years.
New research has shown that (despite the farnesylation inhibitor) the body starts to produce progerin again after some time, which makes the use Lonafarnib for progeriapatients subject to discussion.
A trial version of a therapy with Lonafarnib has been started by the National Institute of Health in the United States in 2007 with a group of Progeria children. This trial with Lonafarnib in Boston was completed in 2009.
In a second ‘Boston trial’, the medication used in 'the Marseille-trial' (see 3) has been added to the treatment with Lonafarnib. The combination of Lonafarnib, Zoledronic Acid, and Pravastatin is also used in a third trial.
For more information, see : www.progeriaresearch.org

A study in 2010 learned that blocking protein farnesylation improves the nuclear shape of progeria cells, another study in the same year by Valerie Verstraeten showed that Lonafarnib can cause donut-shaped nuclei.

3. Therapy with a combination of statins and aminobiphosphonate


A team of Spanish and French researchers (Carlos Lopez-Otin, Oviedo and Nicolas Levy, Marseille) have shown successful treatment of the disease in mice. This treatment combines two existing medicines: statins and aminobiphosphonate: Pravastatin and Zoledronic Acid. Like Lonafarnib, it will not cure the patient, but it may slow the progress of the disease.  Starting october 2008, this therapy has been tested. Twelve children in Europe are offered statins (in tablet form, intended for the treatment and prevention of arteriosclerosis and cardiovascular diseases) and aminobiphosphonate (by intravenous drip, intended to treat osteoporosis). The researchers have shown that this treatment reduces the effects of the disease and increases the life expectancy.  Progeria is caused by an agglomeration in the cells of the shortened protein that has been called progerin. The toxicity of it is connected to the fatty acid that remains stuck to the protein, where it is removed in normal cells. With the combination of statins and aminobiphosphonate, attachment of that fatty acid to progerin can be prevented, thus reducing toxicity levels. As a result, the disease will develop more slowly. The results of this trial have been presented in spring 2012.

4. RNA-interference  A second important strategy in therapy is changing the defective lamin A back into normal lamin A. This can be achieved by coupling a miniscule piece of protein (called morpholino) to the primitive protein lamin A. This process is called RNA interference. In individual cells this is successful and works very well. Unfortunately, to achieve this in a child is much more complex. This is being researched. It is expected that RNA interference will be a more definitive form of therapy for Progeria, and that it will actually restore all the normal functions of lamin A. Defects that are already present, however, will probably not be reversed to normal. Provided that it is administered at a very early stage it may possibly prove to be a full cure for the disease. A study by Paola Scaffidi and Tom Mistelli was published in 2005.

5. In collaboration with Professor Nicolas Lévy, French researchers at IStem have generated induced pluripotent stem cells from progeria patients’ cells. Thanks to this unlimited and standardized biological ressource they are preparing a screening campain of pharmacological compounds in order to identify new treatments of this disease. In parrallel, they also use these stem cells to investigate cellular and molecular mechanisms of HGPS. A first result was published in 2012. Despite the dramatic aging of their body, the absence of any cognitive impairment in children with progeria is surprising. This study explaines how neurons in the brain are protected from premature aging.

In a publication from 2013, Carlos López-Otín and a research team in Oviedo present mosaic mice that carry deficient (prelamin A-accumulating) cells, but also mature lamin A-containing (healthy) cells. Surprisingly, these mosaic mice develop normally. Moreover, prelamin A accumulation does not impair tumour initiation and growth, but it decreases the incidence of infiltrating oral carcinomas. These results support the potential of cell-based and systemic therapies for progeria and highlight ZMPSTE24 as a new anticancer target. Prelamin A causes progeria through cell-extrinsic mechanisms, but also prevents cancer.

Until a definitive medical treatment is found, parents also try to alleviate the symptoms of Progeria in the following ways:

Ascal (calcium carbasalate)
In view of the cardiovascular complaints doctors often advise a preventive low dosage of Ascal (children’s aspirin) every other day (or sometimes daily). The dosage is dependent on the weight of the child. Progeria patients often die as a result of a heart attack or a coronary, which can be caused by blockage of critical veins or arteries. Ascal also works as a blood thinner and in this way prevents stagnation of the blood flow through the veins.

physiotherapy
Gentle physiotherapy and well-adapted physical exercise, such as swimming in warm water helps against the stiffening of the joints. The muscles are strengthened, and it increases the flow of blood.

massage
Some children are massaged several times a week. This is intended to keep the muscles and joints supple and flexible. Often Progeria patients will also have complaints in their joints. For this reason it is important that it is determined per patient which treatment may alleviate the pain.

diet
Children that do not eat well are prescribed a nutritional supplement when the calorie-demand of the child exceeds what it is able to consume with regular meals. Some patients have arteriosclerosis that causes hardening of the connective tissue and may cause circulatory complaints. It is important, therefore, that Progeria patients receive food that is low on cholesterol.

care for the milk teeth (deciduous teeth)
It is important that the milk teeth are cared for properly, because it may be the case that a Progeria patient has to use his/her milk teeth for a long time. The teeth are often only partially replaced, though the permanent teeth are present for possible development. It is wise to use a small, soft toothbrush and soft toothpaste that the child likes. It is also recommended to visit a dentist regularly. The dentist can apply a protective layer onto the teeth. This is called sealing. In the small jaw, there is often little room for the teeth. However, a level of restraint is advised before considering drastic orthodontic treatment.

purchasing necessary appliances
Most of the children are bald, and because of this some like to wear a wig when they go to school. For children with weight problems or with reduced functioning of the heart, an adapted bicycle will often allow them to go to school independently.
Most of the children cannot sit comfortably on a normal chair after some time, which necessitates a specially adapted chair. Some become dependent on a wheelchair.

adjustments in the home
To increase the independence of the child and to promote self-respect, it may be important for the child that certain adjustments are made inside the home. Examples include a reachable door handle and shower tap, low-placed light switches, a safe step at the toilet, and a low washbasin.