In september 2012 scientific researchers from all over the world met in Italy to share the results of their search for a treatment for progeria children. This congress was organised by Giovanna Lantanzi and Stefano Squarzoni form the University of Bologna, and made possible through donations of the Italian organisation for children with progeria: A.I. Pro Sammy Basso.
At the same time and place, all European progeria families gathered for our annual progeria reunion. 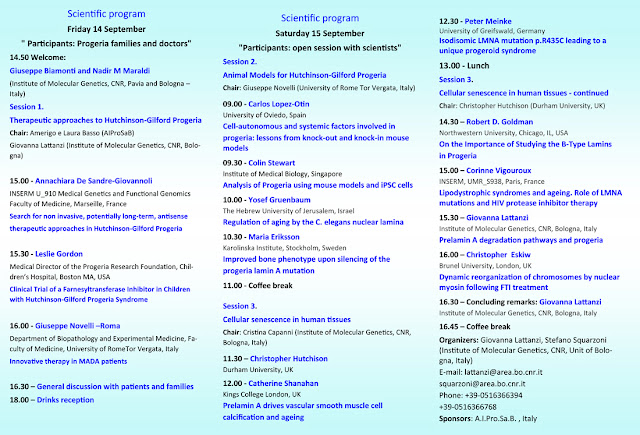 While the children enjoyed a party with clowns and jugglers, parents were informed about different plans for new steps towards a trial. Due to the efforts of high qualified researchers, parents of progeria children are now in the position that they can choose between different options for a treatment. To help them make this difficult decision, doctors explained their approach and illustrated on what grounds they expect the proposed therapy to be benificial.

Reducing the toxicity of progerin is possible with an FTI (Lonafarnib, and/or Vasten). The Progeria Research Foundation plans to continue the use of FTI's, perhaps in combination with an immunosuppressant drug (used to prevent rejection after organ transplantation) in the next trial. In vivo testing on mice will hopefully show that Rapamycin can improve the effectiveness of the FTI’s.

Another approach is the antisense therapy, with a morpholino. Annachiara De Sandre presented findings in research done by Carlos Lopez-Otin and her research team in Marseille. Tests on mice showed promising results, since this medication can not only reduce the toxicity, but also lower the quantity of progerin.
Posted by Marjet Stamsnijder at 12:45 PM No comments: