can treatment with IGF1 help children with progeria? 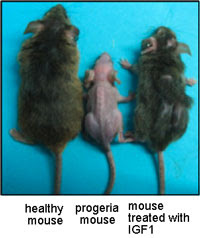 Carlos López Otín and his team observed that their progeroid mice had low levels of the hormone called IGF1.
They used recombinant IGF protein produced in the laboratory to treat the mice and the results were positive in terms of extension of longevity and improvement of progeria symptoms.
The improvement was clear and significant, but lower than that observed with the combination of statins and bisphosphonates which they reported two years ago in Nature Medicine and which has been the basis of the current clinical trial, first conducted by Dr. Nicolas Lévy in Marseille and adopted by the American Progeria Research Foundation in Boston.
The good thing is that additional - yet unpublished work - indicates that positive effects of IGF (albeit not so impressive) could be additive to the pharmacological treatment. Another good thing is that IGF1 has been widely used in children with Laron syndrome with no adverse effects.

Although this finding is interesting, researchers are very cautious regarding immediate translation of laboratory findings in animal models to patients. The option to add IGF to children treated with statins-bisphosphonates will be discussed, for the moment these children will have an adequate follow up of the current treatment that is offered in Marseille.
Posted by Marjet Stamsnijder at 5:46 AM 1 comment: 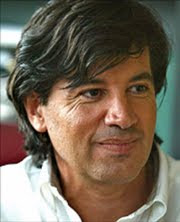 The group of researchers led by Carlos Lopez Otin at the University of Oviedo, has found that insulin growth factor - or IGF1 - extends life in an animal model of human premature aging. The work was published yesterday.

The treatment developed by these researchers can extend a 25 percent longevity of mice with progeria. According to the authors, this represents an important step toward understanding the mechanisms involved in the development of this disease. In addition, it raises a new therapeutic option for patients affected by syndromes of accelerated aging, those who develop during the first years of life characteristic symptoms of old age: osteoporosis, loss of subcutaneous fat and hair, and cardiovascular failure, among others.The life expectancy of people with the most common form of progeria syndrome, Hutchinson-Gilford-is less than 20 years.

The scientists used genetically modified mice created previously in his laboratory. And they found that levels of a hormone known as insulin-like growth factor or IGF1 were abnormally low in these conditions. They decided to restore hormone levels, and treatment with IGF1 led to a marked improvement in various alterations in these mice, including weight gain, recovery of subcutaneous fat and locomotive ability, reduced hair loss and increased significant life expectancy.

According Otín, this paper raises an option "to improve the clinical situation and extend the life of those suffering from premature aging." In work previously published in Nature and Nature Medicine, the same researchers from the University of Oviedo reported that the accelerated aging was associated with abnormal activation of protective mechanisms against cancer and designed a pharmacological strategy aimed at blocking the accumulation protein responsible for this disease. This work has led to an international clinical trial, currently underway in Marseille, to treat children suffering from this dreadful disease.
spanish source
Posted by Marjet Stamsnijder at 1:58 AM No comments: