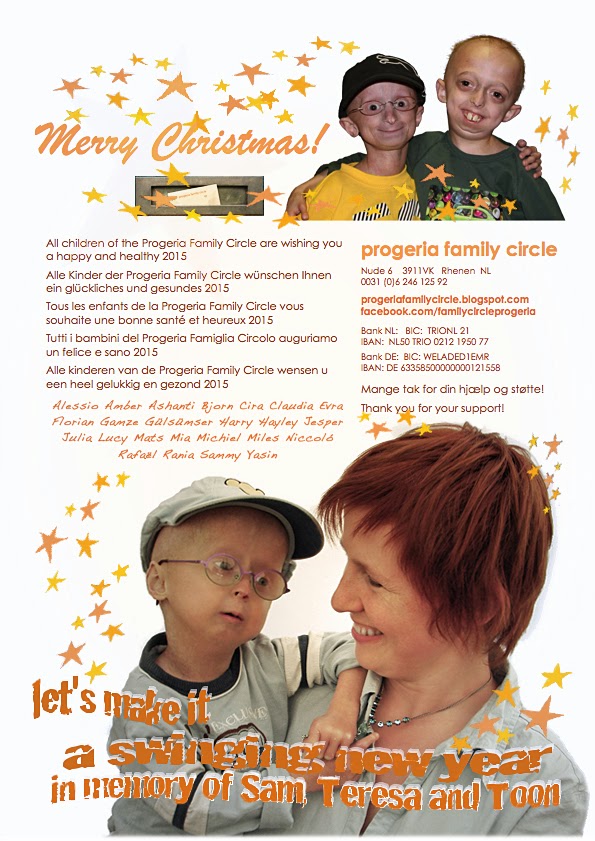 Posted by Marjet Stamsnijder at 6:43 AM No comments:

the beneficial effect of antioxidants in broccoli

The extreme aging in Progeria is caused by an accumulation of a fatty protein that is called Progerin. The presence of Progerin blocks a number of functions in the cell nucleus. This poor protein, which normally would be disposed of in large part, can not be degraded because a genetic code is missing. The clean-up system in the cell is not functioning due to a mutation in the LMNA gene.

The accumulation of Progerin affects several cellular functions. It is also found in healthy cells, but to a much lesser extent. In children with Progeria ten to twenty times more Progerin has been found in the nucleus.
These patients can only make an incomplete form of the protein lamin A. Healthy lamin A has an important function in the wall of the nucleus, it protects the DNA in the cell and plays a role in gene expression. Progerin, a byproduct, only has a function in the construction phase of the protein; it should be disposed of once the nucleus has been formed. However, when it accumulates in the nucleus, progerin causes problems. Patients with progeria develop many problems, including atherosclerosis and osteoporosis, they run the risk of an early stroke or heart attack.

Researchers from the Technical University of Munich (TUM) found more than 28 proteins with a wide range of functions that were not effective in the nuclei of HGPS patients - all the result of the mutation in the lamin A gene. However, they have also shown that the level of progerin in diseased cells can be lowered, by reactivation of the 'cleaning' process. They found a beneficial effect of the antioxidant sulforaphane, found in broccoli (especially in young broccoli sprouts) and other cruciferous vegetables such as cabbage and Brussels sprouts. Sulforaphane (1-isothiocyanato-4-methylsulfinylbutane), showed to reduce the accumulation of Progerin. The progeria cells they treated with sulforaphane also showed decreased DNA damage and less deformation of the nucleus.