new approach for progeria treatment with inhibitor for ICMT

Researchers at Sahlgrenska Academy, the University of Gothenburg, Sweden, have published new results of their work in Science. The group investigated the progeria mutation, that occurs in the protein prelamin A and causes it to accumulate in an inappropriate form in the membrane surrounding the nucleus. 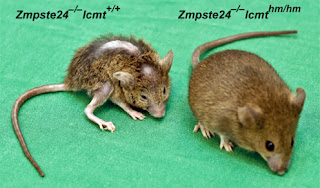 The target enzyme of this study is called ICMT, it attaches a small chemical group to one end of prelamin A. In progeria, blocking this attachment could possibly reduce the development of premature ageing symptoms more effectively. The publication in Science is based on in vitro studies on cells, and has been tested in vivo on mice, treated with a common inhibitor of ICMT. The impact of inhibiting ICMT will need further testing on progeria mouse models with more specified candidate ICMT inhibitor drugs -developped by a collaborating group in Singapore- before it can be offered in a trial to patients.

ICMT has also become the focus of research in the quest for discovering new and more effective cancer therapies. The article Targeting Isoprenylcysteine Methylation Improves Disease Phenotypes in a Mouse Model of Accelerated Aging has been published on May 16. Further reading at Science and the University of Gothenburg.

Posted by Marjet Stamsnijder at 4:07 AM No comments: