In this video, medical students from Leiden University Medical Center show how therapy with an antisense oligonucleotide can influence the structure of an incomplete protein by masking a missing link. Like progeria, Duchenne muscular dystrophy (DMD) is a lethal disease which is caused by non a functional protein. For Duchenne and Progeria patients, this approach offers new perspectives.

It illustrates the process:
Proteins are encoded by a gene, which consists of arrays of exons (E) and introns (I). To make proteins, the introns have to be spliced out by the spliceosome. The exons are then joined together and the amino acids (AA) are synthesized. When there is a mutation (STOP) in the gene, the protein cannot be synthesized properly and is therefore not functional. This protein makes the muscle weak, more prone to damage and eventually degenerates. An approach called 'exon skipping' could correct a faulty gene using a molecule called antisense oligonucleotides (AON). What does it do? The AON is designed to target, bind and mask/hide the mutated exon. The hidden exon will be treated as an intron by the spliceosome, and spliced out together with the other introns.
The protein produced after exon skipping will be shorter, but is expected to function better than the original, mutated protein.
Posted by Marjet Stamsnijder at 12:46 PM No comments: 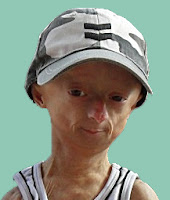 German documentary in which Christian tells about the way he copes with his condition. Once a year, he meets his friends at the progeria family circle reunion.

Progeria: Ein Leben in Zeitraffer
Posted by Marjet Stamsnijder at 2:34 PM No comments:

gene therapy for children with progeria

Scientific research into progeria has made huge progress over the last few years. In 2003 the ‘progeria gene’ was discovered by Nicolas Lévy’s team, and in collaboration with Carlos López-Otín at the University of Oviedo, in 2008, 12 progeria children were offered a clinical protocol in which two molecules were combined to slow down the process of premature aging.
These researchers have continued their efforts to counter the consequences of the genetic defect that causes progeria. 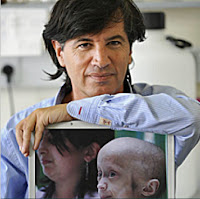 Until now, no mouse model could accurately imitate the effects of the disease in humans. After several years of research, teams led by Nicolas Lévy and Annachiara De Sandre-Giovannoli at Inserm/Université de la Méditerranée in Marseille and by Carlos López-Otín in Oviedo have succeeded in making such a model. The lifespan of mice treated through gene therapy is significantly extended and several other parameters related to them are improved.
The research, published October 26, 2011 in Science Translational Medicine, was made possible by the AFM thanks to donations from the Téléthon.

In 2003, Nicolas Lévy and his team identified the cause of the disease when they discovered the involvement of the LMNA (nuclear protein-coding) gene, lamin A/C. The mutation causes the production of a truncated protein, progerin, which accumulates in the nuclei of cells and its toxic effects cause their deformation and various other malfunctions. It has since been proven that progerin progressively accumulates in normal cells, thus establishing a link between the disease and physiological aging.
European clinical trials began in 2008 on twelve children suffering from progeria. This treatment is based on a combination of two existing molecules: statins (prescribed in the treatment and prevention of atherosclerosis and cardiovascular risks) and aminobisphosphonates (prescribed in to treat osteoporosis and to prevent complications in some forms of cancer). The use of both these molecules aims to chemically alter progerin to reduce its toxicity. However, although this treatment aimed to slow down the development of the disease, it did not reduce the quantities of progerin. To study this aspect, researchers needed to obtain a relevant animal model.
an "authentic" progeria model
To generate a model of this kind, the Spanish and French researchers decided to introduce a gene mutation (G609G), equivalent to that identified in humans (G608G), in mice to reproduce the exact pathological mechanism found in the children, with a view to then blocking it. This approach made it possible to obtain young mice that produced progerin, characteristic of the disease in humans. After three weeks alive, the mutated mice displayed growth defects, weight loss caused by bone deformation and cardiovascular and metabolic anomalies mirroring the human phenotype and considerably reducing their lifespan (an average of 103 days compared with two years for wild mice). The progerin thus produced accumulates in mouse cells via genetic mechanisms (abnormal splicing) identical to those observed in progeria children, i.e. the source of anomalies characteristic of the disease.
towards a targeted gene therapy 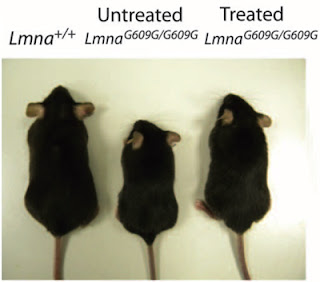 Using this unique progeria animal model, the researchers focussed their efforts on implementing a mutation-targeted treatment, with a view to reducing, and, if possible, preventing the production of progerin. To this end, they used ‘vivo-morpholino’ antisense oligonucleotide technology.
‘This technology is based on introducing a synthetic antisense oligonucleotide into mice’ explains Nicolas Lévy. ‘As is the case with progeria, this sequence is applied to block (or facilitate) the production of a functional protein using a gene. In this case, the production of progerin, as well as lamin A from the gene, were reduced.’
There was a highly significant increase in life expectancy of mice treated using this new technology, from an average of 155 days to a maximum of 190 days.
Nicolas Levy's team, in continued collaboration with Carlos López-Otín, now intends to translate this preclinical research into a new therapeutic trial for progeria children, possibly combined with other pharmacological molecules. Other research is being conducted in parallel to find alternative administration channels for antisense oligonucleotides.
source: inserm